Panda Security announced that Adware increased more than any other type of malware during the third quarter of the year. Adware accounted for 31.05 percent of all new malware that appeared in the third quarter, up almost 10 points from the previous quarter. The main reason, according to the PandaLabs Quarterly Report, is the increase in fake antivirus products used to trick users, infect computers and ultimately, defraud the victims. 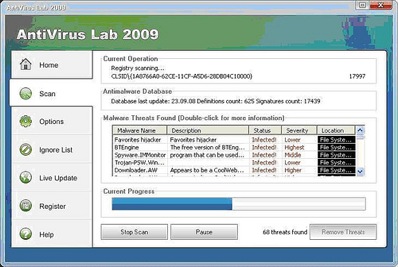 Fake antivirus products, when run, appear to carry out a scan of the user’s PC and inevitably detect a series of infections which are actually false. The applications claim that in order to ‘disinfect’ the computer, users must buy the pay-version of the antivirus. If users fall for this ruse, they will be paying to remove malware which never really existed. The objective of the cyber-crooks behind these scams is, as in most cases, financial gain. Examples of fake antivirus products can be found here:

Despite this growth in Adware, there were more Trojans than any other category of malware, accounting for almost 60 percent of all malware samples that appeared between July and September. Worms (4.53%) and spyware (2.93%) were the other most prevalent categories. Adware, however, was responsible for more infections than any other type of malware, accounting for 37.49 percent of all infections recorded by PandaLabs. Trojans (28.7%) and worms (11.56%) were in second and third place respectively.