Barracuda Networks released a new study that examines the adoption of message archiving solutions within a cross-section of organizations in North America. Collected from the responses of 200 IT professionals in North America, the survey found that an overwhelming majority, nearly 82 percent, view email archiving as “important” or “very important” for their organization. Further, more than two-thirds of respondents cited reasons other than compliance as their main consideration for implementing an email archiving solution. 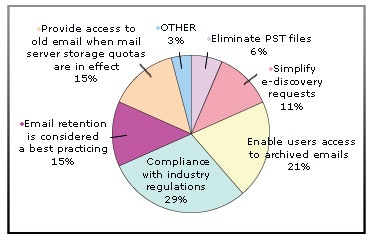 Respondents cited reasons such as user access to archived email (21 percent), email retention is considered a best practice (15 percent) and providing access to old email when storage quotas are in effect (15 percent), as the most important reasons for archiving email.

More than one-third (33 percent) of respondents indicated that it took up to one month to produce email as part of an e-discovery request without the aid of an email archiving solution.

Approximately 38 percent of respondents indicated that they are considering plans to implement a solution. This represents nearly a 10 percent increase over last year, in which about 29 percent of respondents to a similar survey by Barracuda Networks indicated that they were planning to implement an archiving solution (for email or IM) within the year.