In “Ubuntu Kung Fu“, award-winning Linux author Keir Thomas gets down and dirty with Ubuntu to provide over 300 concise tips that enhance productivity, avoid annoyances, and simply get the most from Ubuntu. You’ll find many unique tips here that can’t be found anywhere else. You’ll also get a crash course in Ubuntu’s flavor of system administration. Whether you’re new to Linux or an old hand, you’ll find tips to make your day easier.

Ubuntu builds on a solid base of Debian Linux to create an award-winning operating system that’s light-years ahead of its competitors. Ubuntu consistently tops lists of the most popular Linuxes amongst professionals and enthusiasts; Dell recently embraced Ubuntu in its product lines after a user survey indicated overwhelming public support. 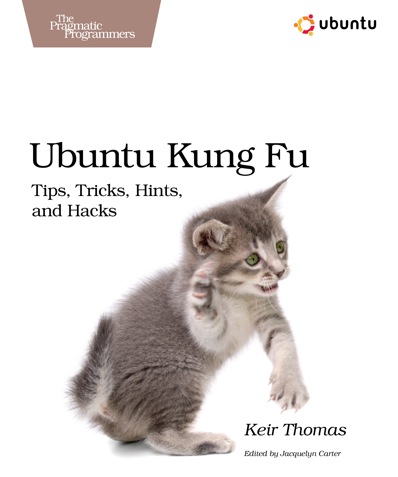 Ubuntu Kung Fu provides hints, hacks, tweaks and tricks for every level of user. Its 300+ concise tips utilize and exploit hidden or lesser-known features to boost day-to-day productivity, and let you have more fun using Ubuntu.
You’ll also find tips on tweaking Ubuntu, wrangling the system into shape, optimizing, enhancing security, and lots more. Learn what extraordinary things can be done with Ubuntu.

If you’re migrating from Windows or Mac OS X, this book is for you. These tips have one aim—to produce results as quickly as possible, in an environment where you can polish your skills as you read.

Keir Thomas is an award-winning author who has been writing about Linux, operating systems and computer hardware for more than a decade. Formerly a computer magazine journalist and editor, working on titles such as Linux User and Developer, Linux Magazine and PC Utilities, his other book titles include Beginning Ubuntu Linux, Third Edition; Beginning Fedora Linux; and Beginning SUSE Linux, Second Edition.