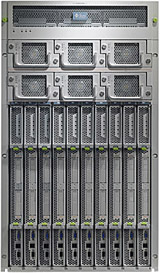 Sun’s x64 servers with the new Quad-Core AMD Opteron processor are capable of consolidating systems at more than a 110:1 ratio and supporting up to 100 virtual servers on a single system. The servers are further enhanced with the Solaris Containers capability in the Solaris OS. Solaris offers scalability and manageability with the AMD Opteron processor spanning from two cores to 32 cores in a single architecture which allows users to standardize and streamline their IT support requirements and scale as their business needs require. Solaris 10 users can also select Solaris ZFS as their root file system and take advantage of a number of key virtualization enhancements enabling them to easily consolidate and maximize datacenter efficiency.