F-Secure’s new Exploit Shield provides “zero-day’ protection against malicious exploit attempts of vulnerabilities such as the Internet Explorer vulnerability, which has been widely exploited since last week. F-Secure Exploit Shield is available as a free download.
Ã‚Â 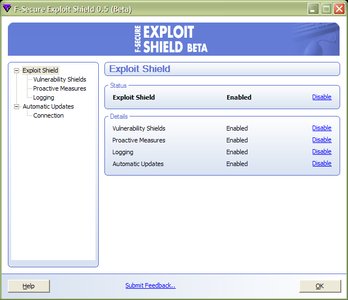 F-Secure today issued a Technology Preview of its new Exploit Shield technology. F-Secure is the first Internet security provider to offer such a shield to protect users from web-based malicious exploits and drive-by downloads, one of the most common ways to infect computers today.

The product enables ordinary consumers to get protection against “zero-day’ exploits for which a patch is not available. These are attacks against vulnerabilities that are unknown to vendors at the time of exploitation. Vulnerabilities in computer software open security holes that can allow exploitation. Patches, issued by the manufacturer of the application, fix the vulnerability.
Ã‚Â
F-Secure Exploit Shield recognizes attempts to exploit a known vulnerability and shields the user against them. It also works against new, unknown vulnerability exploits by using generic detection techniques based on the behavior of exploits.