As Inauguration Day approaches, President-elect Obama’s desk is full of important tasks. Among these tasks is the promise he made to his daughters to provide them with a puppy. Not wanting to leave this promise unexploited, spammers have jumped at the opportunity to use the prospective puppy in one of their survey spam attacks. The survey simply asks, “What kind of dog should Barack Obama get?” 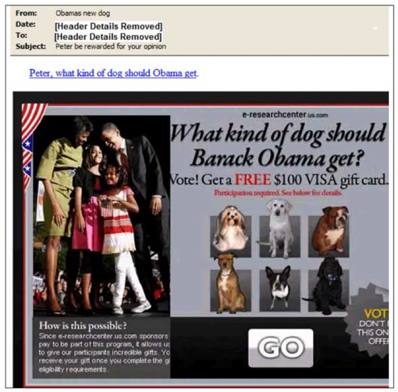 President-elect Obama has been targeted by spammers in numerous ways including: his recent European tour, a special Obama presidential coin offer, and even a DVD which purportedly was a “Barackumentary.” President-elect Obama has joined the ranks of high profile individuals and celebrities whose names and activities are used frequently by spammers to spread their wares.