Web filtering specialist Bloxx announced the results of its independent Anonymous Proxy Survey, which reveals that an alarming 90% of IT Managers in the educational sector view anonymous proxies to be a problem, compared with 51% in the private sector. 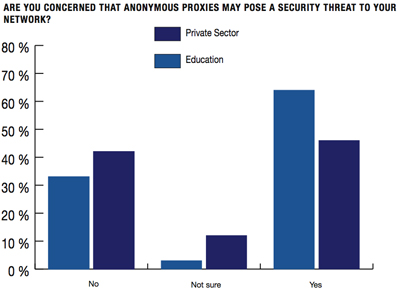 Bloxx’s survey reveals that 64% of IT managers in the education sector view anonymous proxies as a security threat, and 34% consider them to be a serious problem. Whilst this figure is slightly less for IT teams in the private sector – at 46% – 12% of the respondents remain unsure, indicating a possible lack of knowledge concerning the use of anonymous proxies in this sector.

The survey also revealed that 65% of IT managers in the private sector and 47% in education admit to spending the same amount of time as last year dealing with anonymous proxies. The results also show that education IT teams spend more time resolving problems caused by anonymous proxies than their private sector counterparts, with 41% allocating between one and four hours a week.

Anonymous proxies can cause a variety of issues for organisations, yet concerns seem to vary depending on the sector. The private sector is primarily concerned with Acceptable Use Policy violation and lost productivity, as well as threats to network security and data leakage. In the education sector, issues such as child protection, avoiding the exposure of students to inappropriate online material, and the prevention of bullying are of high importance. However, unfiltered access to social networking sites and impact on bandwidth usage is an issue for both the private and education sector.

A copy of the report can be downloaded over here.