The 2009 Identity Fraud Survey Report – released today by Javelin Strategy & Research – confirms that the number of identity fraud victims has increased 22 percent to 9.9 million adults in the United States, while the total annual fraud amount only increased slightly by seven percent to $48 billion over the past year.

The report found detection and resolution efforts are working well—consumers and businesses are detecting and resolving fraud more quickly. As a result the mean consumer costs of identity fraud plummeted by 31 percent to $496 per incident in 2008. The study also found that women were 26 percent more likely to be victims of identity fraud than men this past year. 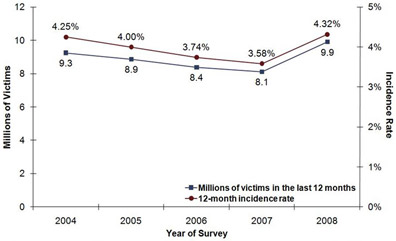 Now in its fifth consecutive year, the comprehensive survey is independently produced by Javelin Strategy & Research. It is the nation’s longest-running study of identity fraud, with 24,000 U.S. respondents over the past five years. Identity fraud is defined as the unauthorized use of another person’s personal information to achieve illicit financial gain. In October 2008, nearly 4,800 telephone interviews with U.S. consumers identified important findings about the impact of fraud while at the same time uncovering both areas of progress and concern for Americans.

Other findings in this year’s report reinforce the trend that when the cause of fraud is known by the victim, criminals are frequently obtaining personal information from stolen physical belongings. Stolen ATM/Debit personal identification numbers (PINs) are another possible route to fraudulent activity and California and Illinois continue to be hotbeds of identity fraud activity.

Overall Identity Fraud Incidents Increased in the United States — The number of identity fraud incidents increased by 22 percent over 2007, which brings them back up to levels not seen since 2004. One significant factor likely contributing to this rise is economic misfortune. Historically, higher rates of fraud occur when the economy worsens and identity fraud remains substantially lower overall when compared to the 2004 level of $60 billion.

Cost to Consumers is Down — The mean consumer cost of identity fraud decreased 31 percent from $718 to $496 per incident, its lowest level since 2005. This fraud-reduction-per-incident is attributable to fraud being detected faster, lower fraud amounts and quicker resolution times thanks to industry efforts and consumer education.

Fraudsters are Moving Much More Quickly — In cases where identity fraud was reported, 71 percent of the fraud incidents began occurring in less than one week from when the data was first stolen, up from 33 percent in 2005. This dramatic increase points to more sophisticated attacks by fraudsters and an increasing number of attacks of opportunity where people or businesses leave data exposed.

Gender Disparity — Women were 26 percent more likely to be victims of identity fraud than men in 2008. Factors surrounding this new trend include women making more purchases in stores, as well as more women than men having their information breached last year.

Low-tech Methods Still Most Popular — Lost or stolen wallets, checkbooks and credit and debit cards were still the most likely avenues of fraudsters’ attacks. These avenues totaled 43 percent of all incidents where the method of access was known. By protecting this information, consumers can significantly lower their risks.

Approximately 1.8 million more adults fell victim to identity fraud in 2008, compared to 2007. This is the first year-over-year increase since Javelin began collecting data in 2004, when 4.25 percent of the overall adult population in the United States was victimized. The greatest increase occurred in fraud on existing card accounts, rather than the crimes which have a more severe impact such as opening new accounts.

Despite the increase in fraud incidents, the total annual fraud amount rose just seven percent to $48 billion, up from $45 billion in the previous report and 20 percent lower than it was in 2004. These figures represent the total amount that criminals were able to obtain illegally. The average fraud amount decreased (by 12 percent) to $4,849.

This decrease is likely attributable to greater consumer awareness of the risks – increased availability of security, controls and consumer education campaigns by banks, card associations and other organizations; and greater access to more sophisticated prevention and detection resources from privacy and security companies. As businesses and consumers continue to work closely together and with consumers more frequently updating anti-spyware and anti-virus software and protecting sensitive data by safely adopting online financial services, such as online banking and bill paying, Javelin Strategy & Research expects the fraud-reduction-per-incident trend to continue downward.