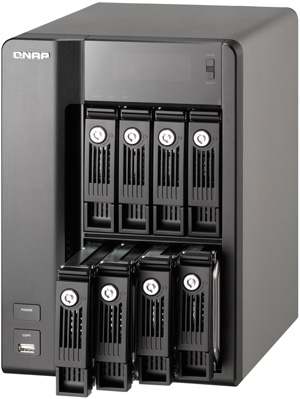 According to the IOmeter test in QNAP lab, the read/write performance of the TS-809 Pro reaches more than 126MB/s and 111 MB/s respectively. The TS-809 Pro can also be used as a mass data storage center, especially for SOHO and home users, to store and share millions of multimedia files.

The TS-809 Pro supports built-in iSCSI target service with Thin Provisioning. Up to 8 iSCSI devices can be created for storage expansion or backup destination of the existing application servers on the network. The NAS comes with the Surveillance Station feature which supports real-time monitoring and video playback from up to 4 IP-based cameras.