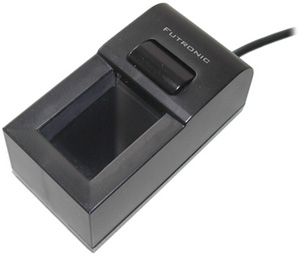 It’s small size makes FS90 a perfect device for mobile application. Together with 0.3 meter USB cable, it is more convenient to be carried around by notebook PC users and work with PDA or mobile phone. FS90 can be used together with all Futronic standard software products, FinLogon Personal Edition (PE), FinLogon Enterprise Edition (EE), SDK and FAS.

FS90 module is available for customers who want to integrate FS90 into their own products. It is same as FS90 but even smaller because it does not have plastic shell and USB cable. Its size is 43(L) x 24(W) x 25(H) mm and can be easily embedded into any target system.

FS90 and its module are ready to work on popular operating systems as well as handheld devices. Futronic provides Application Programming Interface (API) to capture fingerprint image on Windows XP and Vista, Windows CE 5.0/6.0, Linux with kernel 2.4 or higher and MAC OS. After fingerprint image is captured, it can be processed, transferred, stored and matched with pre-stored data by any backend software that makes project implementation very flexible.