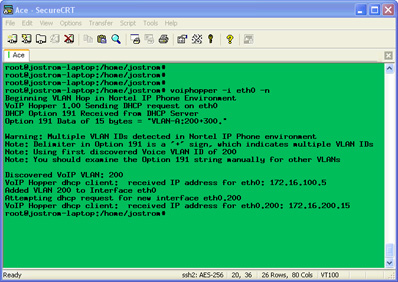 In Cisco IP Phone networks, it first dissects either IEEE 802.3 or Ethernet II for Cisco Discovery Protocol (CDP) packets. If CDP is enabled on the switch port and the Voice VLAN feature is enabled, it will determine the Voice VLAN ID (VVID). This will allow the tool to create a new Ethernet interface on the PC that tags the 802.1q VLAN header in the Ethernet packet. After VoIP Hopper has created the new Ethernet device, it will send a DHCP client request. It can also generate CDP messages just as an IP Phone based on CDP would do. It will send two CDP packets, requesting the Voice VLAN ID. After creating the new interface, it will then iterate between sleeping for 60 seconds, and sending a CDP packet.

In Avaya IP Phone environments, it sends an Option 55 parameter request list, requesting Option 176. When the DHCP server sends Option 176, it decodes the L2QVLAN reply field for the Voice VLAN ID. It then creates a new voice interface and sends a DHCP request.

Version 1.0 is available here and comes with the following features and bug fixes: