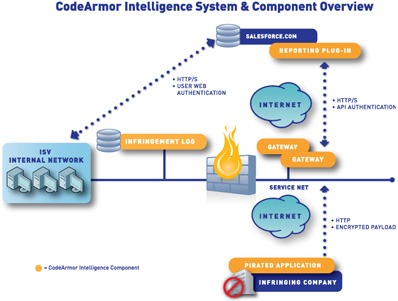 After the data is collected at a gateway server, geo-location information can be automatically added and reported to the CodeArmor Intelligence reporting plug-in for Salesforce.com to view the location of the infringing business through Google Maps.

Other features include powerful gateway server filtering that uses rules to modify, delete or log data before sending it to the reporting interface. It uses regular expressions to create rules to focus on what data gets reported or selectively exclude certain data based on geography.