Head First Networking has a visually rich format, which provides a task-based approach to computer networking that makes it easy to get your brain engaged. You’ll learn the concepts by tying them to on-the-job tasks, blending practice and theory in a way that only Head First can. 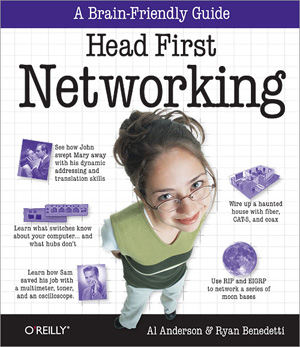 Head First Networking gets your hands dirty solving real network problems. Are you chasing down a break in your fiber network? Did you just discover the blueprints you were given left out major obstructions? Whether it’s DHCP or NAT, port mapping or IP spoofing, routers or switches, you’ll learn what’s really going on–and how to fix the problems that can shut down your network–rather than a laundry list of acronyms and diagrams.

This book will help you:

The book’s popular format is proven to stimulate learning and retention by engaging you with images, puzzles, stories, and more.