Symantec announced the global results of its fifth annual IT Disaster Recovery survey, which demonstrates rising DR pressures on organizations caused by soaring downtime costs and more stringent IT service level requirements to mitigate risk to the business. The study also shows that while DR budgets are higher in 2009, they are expected to remain flat over the next few years — requiring IT professionals to do more with the same or less. 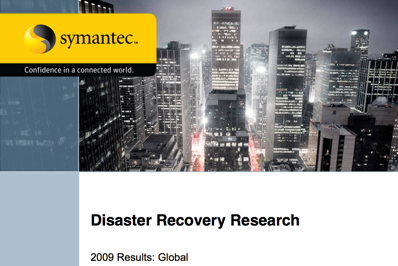 The survey highlights that while recovery time objectives were reduced to 4 hours in 2009, disaster recovery testing and virtualization are still major challenges for organizations. Respondents report that DR testing increasingly impacts customers and revenue, and one in four tests fail. Nearly a third of organizations don’t test virtual environments as part of their disaster recovery plans, and a slightly larger percentage of virtual environments aren’t regularly backed up — pointing to the need for more automation and cross-environment tools.

The average cost of executing/implementing disaster recovery plans for each downtime incident worldwide according to respondents is US $287,600. In North America, the median cost can climb to as high as $900,000. Globally, this number is highest for healthcare and financial services organizations. In North America, the median cost for financial institutions is $650,000.
This is alarming when one considers that one in four tests failed and 93 percent of organizations have had to execute on their disaster recovery plans. Respondents reported that it takes on average three hours to achieve skeleton operations after an outage, and four hours to be up and running. This is dramatically improved over the 2008 findings, where only three percent of respondents reported that they could achieve skeleton operations within 12 hours, and 31 percent believed they would have baseline operations within one day.

The research shows that the annual median budget for disaster recovery initiatives, including backup, recovery, clustering, archiving, spare servers, replication, tape, services, disaster recovery plan development and offsite costs at data centers surveyed is $50 million. According to respondents, this number will continue to grow throughout 2009, but more than half (52 percent) of respondents believe that budgets will be flat in 2010, making it more challenging for IT management to better leverage their assets including hardware, software and personnel.

Executive involvement doubled in past year

This year, 35 percent of respondents reported that they test their DR plans once per year or less frequently — a 12 percent improvement from last year. In addition, one in four tests still fail, showing a dramatic need for improvement in this area. Reasons most respondents cited for why organizations aren’t testing include:

Sixty-four percent of worldwide respondents reported that virtualization is causing them to reevaluate their disaster recovery plans. This is up from 55 percent in 2008. Still, nearly a third (27 percent) of organizations do not test virtual environments as part of their disaster recovery initiatives. This number has improved in the past year, lowering from more than one-third (35 percent) of organizations who did not test in 2008. Additionally, more than one-third (36 percent) of data on virtualized systems is not regularly backed up, showing no improvement in the past year (37 percent in 2008). Over half of the respondents cited lack of backup storage capacity and automated recovery tools as top challenges to protecting data in virtual environments.

In addition, the study found that globally, more than half of respondents cited:

As demonstrated over multiple years of this study, lack of resources continues to be an issue, yet the costs of downtime are staggering. Organizations can also do a better job at curbing the costs of downtime by implementing more automation tools that minimize human involvement and address other weaknesses in their disaster recovery plans.

Because disaster recovery testing is invaluable, but can significantly impact business — including customers and revenue — organizations should seek to improve the success of testing by evaluating and implementing testing methods which are non-disruptive.

Finally, organizations should include those responsible for virtualization into disaster recovery plans, especially testing and backup initiatives. Virtual environments should be treated the same as a physical server, showing the need for organizations to adopt more cross-platform and cross-environment tools, or standardizing on fewer platforms.

In its fifth year, the 2009 Symantec Disaster Recovery Research report is an annual global study commissioned by Symantec to highlight business trends regarding disaster recovery planning and preparedness. Conducted by independent market research firm Applied Research West during June 2009, the study polled more than 1650 IT managers in large organizations across 24 countries in the U.S. and Canada, Europe and the Middle East, Asia Pacific and South America to gain insight and understanding into some of the more complicated factors associated with disaster recovery.