Sophos discovered of a mass-mailing worm attack that is currently spreading via a malicious email campaign. The email, which has the subject line ‘Remembering Michael Jackson’ and claims to come from ‘sarah@michaeljackson.com’, says that an attached ZIP file – titled ‘Michael songs and pictures.zip’ contains secret songs and photos of Michael Jackson. 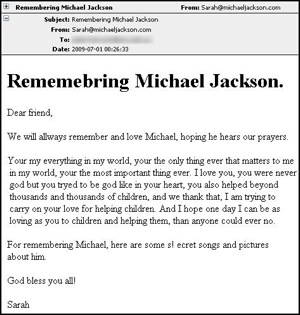 However, by opening the attachment, computer users are exposed to infection.Ã‚Â  Once infected, a computer will begin automatically spreading the worm onto other internet users.Ã‚Â  Besides spreading via email, Sophos experts note that the malware is also capable of spreading as an Autorun component on USB memory sticks – an increasingly common trend for malware, as use of these devices becomes more and more popular.