This malware rating is compiled from data generated by the Kaspersky Security Network (KSN).

The first Top Twenty lists malicious programs, adware and potentially unwanted programs that were detected and neutralized when accessed for the first time, i.e. by using the on-access scanner. Using on-access statistics makes it possible to analyze the most recent, most dangerous and most widespread malicious programs that were blocked when launched on users’ computers or when downloaded from the Internet. 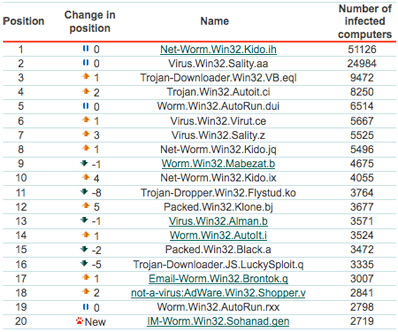 There were no significant changes to the first Top Twenty in July: Kido and Sality remain the runaway leaders.

However, the overall number of computers infected by the most common malicious programs has fallen slightly. This may have something to do with users spending less time in front of their PCs in midsummer, resulting in fewer machines becoming infected with malware. 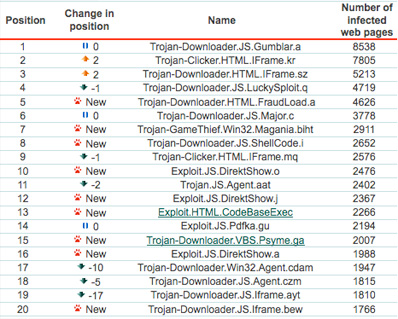 Everything is a lot more interesting in the second Top Twenty, which presents data generated by the web antivirus component and reflects the online threat landscape. This ranking includes malicious programs detected on web pages and malware which attempted to load from web pages. In other words, the second ranking answers two questions: “What malware most often infects web pages?” and “Which malicious programs are most often downloaded – with or without the user’s knowledge – from malicious or infected pages?”

Recently there has been a tendency for cybercriminals to split malicious scripts into several parts – in the case of DirektShow, the main page with the exploit for the msvidctl vulnerability contains a link to another script that downloads shell code with its own malicious payload. Trojan-Downloader.JS.ShellCode.i, in eighth place in our rating, is the shell code most commonly used to exploit this vulnerability. This approach is straightforward and is particularly beneficial for the cybercriminal – the shell code script can be replaced at any time but the link to the main page remains the same. This set-up makes it more difficult to analyze and create detection for such malware, and where automated systems are used, it may be impossible.

In order to make spreading malware (specifically ransomware in the form of rogue antivirus applications) easier, the same web templates will be used over and over again. Trojan-Downloader.HTML.FraudLoad.a – a new entry in July – is an example of this approach; this detection actually detects one of the stock templates. Such malware is becoming increasingly popular in the world of cybercrime. As a result, a huge number of websites are appearing which claim that the user’s computer is infected, and then download programs which are not only annoying, but also often pose a real threat. In twentieth place in July’s rating – Trojan-Downloader.JS.Iframe.bew – is one such script used to download malicious programs from such sites.

The second Top Twenty provides an overview of the current online threats as well as the underlying trends. Firstly, cybercriminals are focusing on finding new vulnerabilities in the most popular software with the aim of exploiting them to achieve their goal – infecting computers with one or, more often than not, several malicious programs. Secondly, cybercriminals attempt to hide their activity so that it either passes unnoticed, or seem to be resulting in minimal damage to the infected machine.

All this makes surfing the Internet without a fully-patched operating system or an up-to-date antivirus solution tantamount to swimming in shark-infested waters – and this applies to even the most experienced users.

Countries where most attempts to infect computers via the web were recorded: 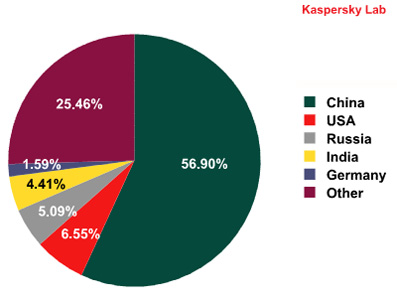