LegitScript, an online pharmacy verification service, and KnujOn, an Internet compliance company, have released a report analyzing Microsoft’s sponsored search results for Internet pharmacies displayed on bing.com. The report indicates that 89.7% of the Microsoft Internet pharmacy advertisements reviewed by the authors were fake or illegal Internet pharmacies. 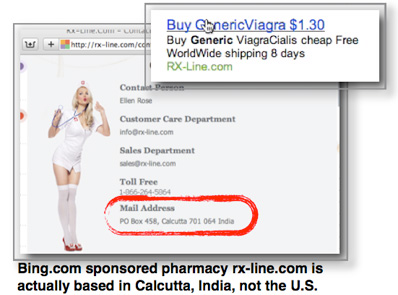 Also, the authors ordered another prescription drug from a Microsoft-sponsored advertisement that tested positive as counterfeit.

Search engine advertising programs allow website owners to purchase visibility on the first few pages of search results, where online ads are listed as “sponsored sites.” Because Microsoft receives revenue when an Internet user clicks on a bing.com advertisement, it is generally accepted that online ads should not facilitate unlawful activity.

LegitScript President John Horton said, “We were able to purchase potentially addictive drugs without a prescription or any age verification via bing.com ads. We also received counterfeit medication. Microsoft profits from these illegal ads, which put Internet users at risk.”

The study also found disclosure gaps in bing.com’s advertising program, showing how an advertisement that appears to have been placed by a legitimate pharmacy links instead to a “rogue” online pharmacy.

“We urge Microsoft to fix this problem,” Horton and Bruen stated. “By continuing to allow these advertisements, Microsoft is facilitating prescription drug abuse and the proliferation of counterfeit drugs, both of which put our most vulnerable citizens at risk.”