Amazon Virtual Private Cloud (Amazon VPC) is a secure and seamless bridge between a company’s existing IT infrastructure and the AWS cloud. Amazon VPC enables enterprises to connect their existing infrastructure to a set of isolated AWS compute resources via a VPN connection, and to extend their existing management capabilities such as security services, firewalls, and intrusion detection systems to include their AWS resources. 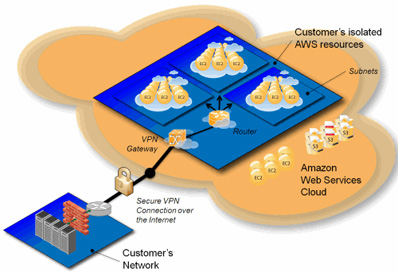 Amazon VPC integrates today with Amazon EC2, and will integrate with other AWS services in the future.

This new service is now in a limited beta and you can apply for admission here.

Here’s all you need to do to get started:

1. Create a VPC. You define your VPC’s private IP address space, which can range from a /28 (16 IPs) up to a /18 (16,384 IPs). You can use any IPv4 address range, including Private Address Spaces identified in RFC 1918 and any other routable IP address block.
2. Partition your VPC’s IP address space into one or more subnets. Multiple subnets in a VPC are arranged in a star topology and enable you to create logically isolated collections of instances. You can create up to 20 Subnets per VPC (you can request more using this form). You can also use this form to request a VPC larger than a /18 or additional EC2 instances for use within your VPC.
3. Create a customer gateway to represent the device (typically a router or a software VPN appliance) anchoring the VPN connection from your network.
4. Create a VPN gateway to represent the AWS end of the VPN connection.
5. Attach the VPN gateway to your VPC.
6. Create a VPN connection between the VPN gateway and the customer gateway.
7. Launch EC2 instances within your VPC using an enhanced form of the Amazon EC2 RunInstances API call or the ec2-run-instances command to specify the VPC and the desired subnet.

Once you have done this, all Internet-bound traffic generated by your Amazon EC2 instances within your VPC routes across the VPN connection, where it wends its way through your outbound firewall and any other network security devices under your control before exiting from your network.