According to Mischel Internet Security, there’s a new Trojan going around. Detected as TrojanClicker.VB.395 by TrojanHunter, it preteds to be an update for Adobe Flash: 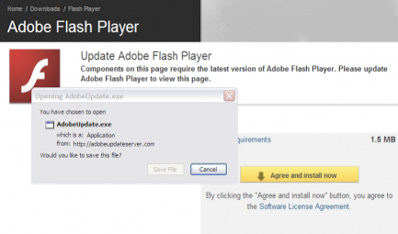 It even looks like it’s doing the updating, then tells you to shut Firefox down during the installation process (so it can install a plugin). And it shows it to you, too:

It looks like the real deal and it proclaims to give you “unprecedented creative control with new expressive features and visual performance improvements in Adobe Flash Player […]”.

The final result is your Google searches being monitored and sent to a server at msjupdate.com where the data is stored. This is done so that the plugin can insert targeted ads into the web sites you visit. Additionally, it has been discovered that the malware also keep tabs on every URL you load. All this combined represents a grave threat to privacy.