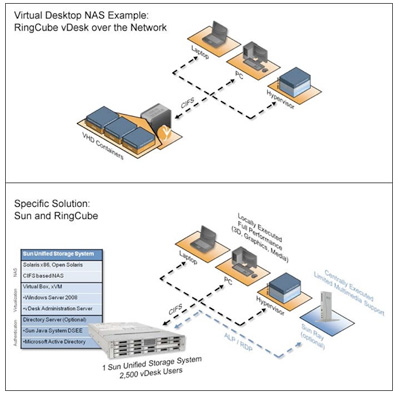 It delivers networking technology that enables users to stream their desktop from any NAS appliance or file server that supports the CIFS protocol from a virtual hard drive container.

Enhancements into version 2.1 include networking technology that provides broader support to any CIFS-based storage device in the event of temporary network connectivity loss and a new VHD container format.

vDesk over the network is one of the four vDesk deployment methods. Users access their virtual desktop over the LAN using the on-demand client that is automatically downloaded via a web-based client portal. When the user runs their virtual desktop, the personalized workspace is streamed to the user’s PC and executed locally, allowing data, applications, and settings to be stored centrally. When the user shuts down their workspace, the changes that were made during the session are preserved on the NAS appliance for the user to access in the future from any PC on the LAN without leaving data behind on the host PC from the virtual workspace.

The solution is interoperable with Sun Mycrosystems’desktop virtualization products. Pricing for vDesk starts at $200 per user.