Programming Cocoa with Ruby brings together two enthusiastic development communities. Ruby programmers will tell you how productive they are with just the right amount of code. Cocoa developers know the importance of a clean, intuitive interface. 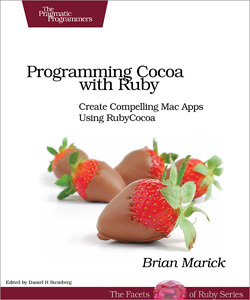 Now, through Programming Cocoa with Ruby, the joy of Cocoa meets the joy of Ruby Author Brian Marick tells us, “It’s simple, really: if you like Ruby and you like Macs and you want to put the two together, this book is for you.”

This is a book for the Ruby programmer who’s never written a Mac app before. Through this hands-on tutorial, you’ll learn all about the Cocoa framework for programming on Mac OS X. You’ll delve into the Cocoa framework right from the beginning, as this experienced Ruby programmer answers the questions and solves the same problems that you’ll face.

Together you’ll build a single application that threads throughout the book, and it’s not a toy. You’ll cover topics that may not be the flashiest parts of Cocoa, but they’re ones you’ll need to know to create applications for yourself. And you’ll learn more than just Cocoa and RubyCocoa, you’ll get first-hand effective agile development practices. You’ll see test-first development of user-interface code, little domain-specific languages that take advantage of Ruby features, and other Rubyish tricks.

At the end of the book, you’ll be ready to write a real Mac OS X application that can be distributed to real users.