Spam levels in Denmark rose by 3.0% in September, positioning it as the most spammed country with levels of 95.6% of all email. In the US, spam activity increased to 91.8% and to 91.2% in Canada.

Viruses
One in 399.2 emails in September contained malware (a decrease of 0.09% since August).

Spoofed postcard mails were responsible for 54.5% of malicious links in September. Virus activity in Switzerland rose by 0.08%, the largest increase for all countries, to 1 in 183.7 emails, placing it at the top of the table in September. Further analysis of the most frequently intercepted malware identified were: 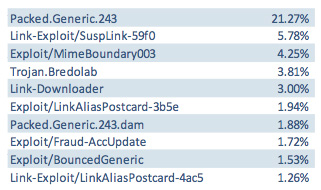 Phishing
One in 437.1 emails comprised a phishing attack (a decrease of 0.11% since August).

Phishing activity over the recent summer months has declined overall, whilst much of the increased activity earlier in the year could be linked to the wider availability of phishing toolkits. More recently there has been a rise in the proportion of phishing attacks in non-English languages. The recent fall in phishing attacks is also in large part owing to fewer phishing attacks targeting social networking websites.

Malicious websites
2,337 websites blocked per day (a decrease of 33.4% since August).

Further analysis of the policy-based filtering traffic indicates that some categories have experienced higher rates of increase in terms of the number of websites blocked in recent months. Over the past two months, the greatest increase has been in the number of blocks for web-based email websites, which has increased by 77.8% when compared with the previous two months.

33.5% of all malicious domains blocked and 12.3% of all web-based malware blocked was new in September.