Encrypted Disk Detector (EDD) is a command-line tool that checks the local physical drives on a system for TrueCrypt, PGP or Bitlocker encrypted volumes. If no disk encryption signatures are found in the MBR, EDD also displays the OEM ID and, where applicable, the Volume Label for partitions on that drive, checking for Bitlocker volumes. 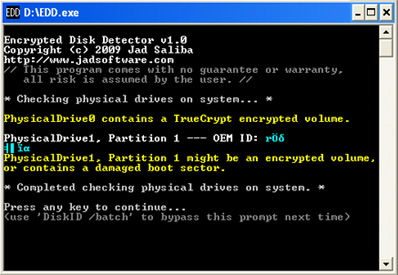 EDD is useful during incident response to quickly and non-intrusively check for encrypted volumes on a computer system. The decision can then be made to investigate further and determine whether a live acquisition needs to be made in order to secure and preserve the evidence that would otherwise be lost if the plug was pulled.