Symantec shared an uncommon Mac malware type on one of their official blogs: a combination of malware and a game similar to the once popular Space Invaders. They detected the threat as OSX.Loosemaque. 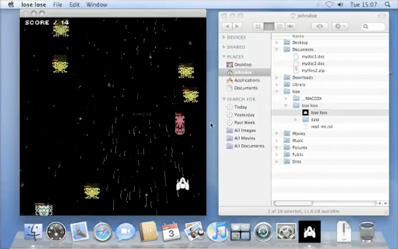 The game/malware works like this: for every alien ship you destroy, a file from you home directory is deleted.

The author of the game has seemingly no malicious intent – at the beginning of the game he put a warning screen about what the game does to your computer, so this may well be a “fun” project just for the sake of it.

The first files to disappear are the one from the document folder. After them, the preference files in the home directory are targeted. At one point, the game crashes – probably because it deleted a critical file. In any case, the deleted files are lost.

As stated before, it’s highly probable that the author didn’t intend to misuse the “game”, but there’s nothing stopping others to modify it (for example, remove the warning screen) and try to peddle it to unsuspecting victims.