AV-Comparatives.org recently released the results of a malware removal tests with which they evaluated 16 anti-virus software solutions:

Based on a scoring system that evaluated malware and leftovers removal capabilities, these were the results: 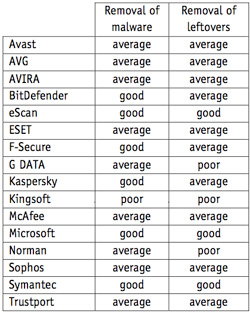 “None of the products performed “very good” in malware removal or removal of leftovers, based on those 10 samples. eScan, Symantec and Microsoft (MSE) were the only products to be good in removal of malware AND removal of leftovers”, says the report. “Some products do not remove all registry entries on purpose (as long as they do not have any visible side effect for the user), e.g. if that helps to prevent reinfection by the same malware. Furthermore, in some cases it is not possible to know if the registry values (or the hosts file) were modified by the malware or by the user itself (or third-party utilities used by the user).”

To see which malware sample were used and why, and how the particular anti-virus solutions behaved, go here.