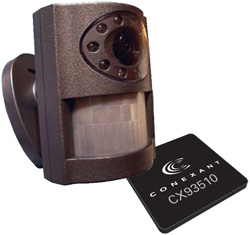 The CX93510 operates at 12 milliamperes (mA) in full power and 10 nanoamps (nA) in sleep mode, which maximizes battery life. This is an important feature to alarm companies, many of which are targeting two-to-five years of system operation before battery replacement is required. In addition, low-power systems generate less heat, which is a key consideration for embedded applications such as intercoms installed in a wall and alarm systems located in areas with poor ventilation.

The new video encoder includes support for PIR technology, which is used in motion sensors to detect changes in temperature caused by infrared sources of energy such as a person entering a room. When this occurs, the motion sensor triggers the image-capture portion of the security system, which begins visually recording the event.