Critical infrastructure such as energy, pharmaceutical and government assets are more than twice as likely to be targeted by cybercriminals than other organizations, according to a ScanSafe report.

The report is based on an analysis of more than a trillion Web requests processed in 2009 by the ScanSafe Threat Center on behalf of the company’s corporate customers in more than 100 countries. It represents the world’s largest security analysis of real-time traffic.

This research reflects a disturbing trend – organizations that harness the most valuable intellectual data are encountering Web malware with much greater frequency than other verticals. Most at risk are:

“There is a misconception that cybercriminals are only intent on stealing data intended for credit card fraud and identity theft. In reality, cybercriminals are casting a much wider net,” said Mary Landesman, senior security researcher at ScanSafe. “Consumer credit card details are child’s play compared to the value of infrastructure and intellectual data from these sensitive verticals. The message is clear – cyberwar is already here. The Web is the battlefield and the enterprise is on the frontlines.”

In addition, the report reveals that Web-delivered malware more than doubled through the course of the year. At the start of 2009, the average enterprise experienced 8 Web malware encounters each day. By the end of 2009, the rate of exposure had more than doubled to 19 encounters per day. Twenty-three percent of those encounters were with zero day malware undetectable by signature-based methodologies and nineteen percent were direct encounters with data theft Trojans.

Gumblar botnet dominated the malware scene in 2009
14% of the total Web malware blocks for the year were from Gumblar. This peaked to 35% of all blocks in November 2009. Asprox was the second largest at 2% of all Web malware blocks and Zeus was the third largest with 1%.

Malicious PDF files are up, malicious Flash files are down
Malicious PDF files comprised 56% of Web-encountered exploits in 1Q09, growing to 80% by 4Q09. Flash exploits encountered via the Web dropped from 40% in 1Q09 to 18% in 4Q09. This trend is likely indicative of attackers’ preference for PDF exploit, likely due to the increasing availability of vulnerabilities and the continued widespread use and acceptance of PDF files in the workplace. 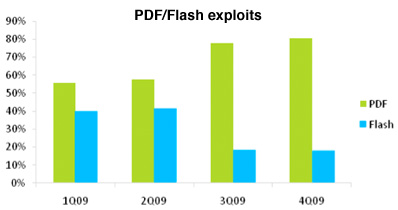 “To confront the challenges of the coming years, we must reposition our thinking to match the new reality. We must forgo our perceived familiarities and see the issues that are already at hand – the criminal business of data harvesting,” comments Landesman. “Our defenses must extend beyond the confines of brick and mortar and into the cloud to ensure end-to-end protection of our most sensitive assets and people, regardless of operating system, device or geo-locale.”