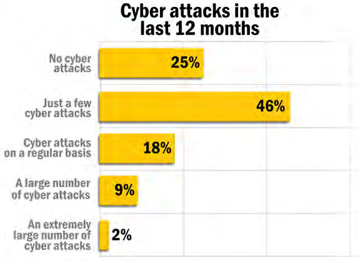 Organizations reported that enterprise security is becoming more difficult due to understaffing, new IT initiatives that intensify security issues and IT compliance issues. The study is based on surveys of 2,100 enterprise CIOs, CISOs and IT managers from 27 countries in January 2010.

Security is of great concern to global enterprises. Forty-two percent of enterprises rank cyber risk as their top concern, more than natural disasters, terrorism, and traditional crime combined. Reflecting that perception, IT is intently focused on enterprise security. On average, IT assigns 120 staffers to security and IT compliance. Enterprises rated “better manage business risk of IT” as a top goal for 2010, and 84 percent rated it absolutely/somewhat important. Nearly all the enterprises surveyed (94 percent) forecasted changes to security in 2010, with almost half (48 percent) expecting major changes.

Enterprise security is becoming more difficult due to a number of factors. First, enterprise security is understaffed, with the most impacted areas being network security (44 percent), endpoint security (44 percent), and messaging security (39 percent). Second, enterprises are embarking on new initiatives that make providing security more difficult. Initiatives that IT rated as most problematic from a security standpoint include infrastructure-as-a-service, platform-as-a service, server virtualization, endpoint virtualization, and software-as-a-service. Finally, IT compliance is also a huge undertaking.

The typical enterprise is exploring 19 separate IT standards or frameworks and are currently employing eight of them. The top standards include ISO, HIPAA, Sarbanes-Oxley, CIS, PCI, and ITIL.