Existing threats such as phishing and document format vulnerabilities have continued to expand, even as users improve security, according to a new IBM report. The X-Force report reveals three main threats that demonstrate how in 2009 attackers increasingly targeted people using the Internet for monetary gain or data theft. The appearance of new malicious Web links has skyrocketed globally in the past year. 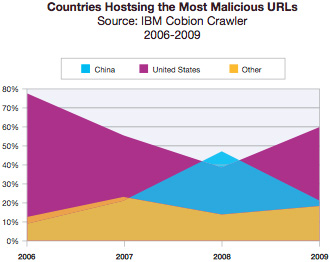 Phishing attacks, or sending email that falsely claims to be from a legitimate organization, also increased dramatically in the second half of 2009. It surpassed the monthly volume seen in 2008, with activity coming from countries that had not previously been in the game.

Vulnerability disclosures for document readers and editors also continued to soar. Of the two predominant types of document vulnerabilities – office documents including spreadsheets and presentations and PDF documents – the latter has continued to dominate the charts.

“Despite the ever-changing threat landscape, this report indicates that overall, vendors are doing a better job responding to security vulnerabilities,” said Tom Cross, manager of IBM X-Force Research. “However, attackers have clearly not been deterred, as the use of malicious exploit code in Web sites is expanding at a dramatic rate.” 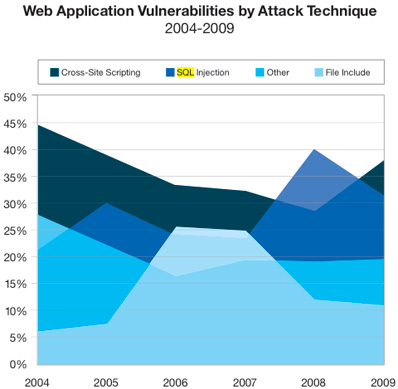 The 2009 X-Force Trends and Risk Report also finds that:

Phishing is still focused on the financial industry. While some phishing scams target logins and passwords, others attempt to entice victims into entering detailed personal information by posing as government institutions. By industry, 61 percent of phishing emails purport to be sent by financial institutions, whereas 20 percent purport to come from government organizations.