A bevy of emails purportedly coming from New York-based law firms Crosby & Higgins, and Marcus Law Center has been hitting inboxes around the world, CA warns.

With the fear-inducing subject line of “Lawsuit initiated against you”, the email contains the following message (with minimal variations from email to email): 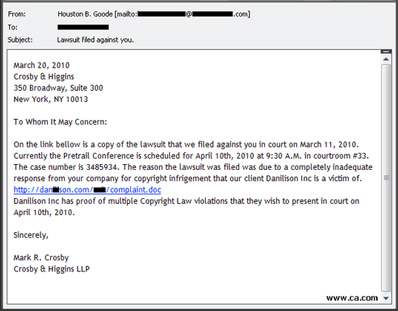 If the recipient clicks on the included link, he will download an RTF file seemingly containing a PDF, but which actually is a malicious executable that disables his anti-virus solution and modifies your registry.

The message looks pretty legitimate, even though it contains a couple of grammatical errors. But, even those might be overlooked by a scared user.

The two law-firms in question have been appraised of the fact that their names are being used for this spam campaign, and have already put a warning for users on their websites.