A rogue application claiming to be a Facebook AV has been spreading through the Friends list of its targets. Once installed, the application spreads by taking a picture like the one below and tags it with the names of 20 friends, bringing itself to the attention of those users without messaging them directly (an action forbidden by Facebook rules). 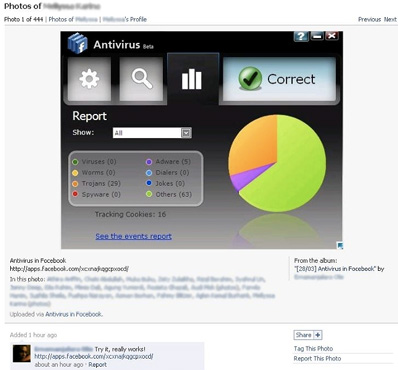 If any of the tagged users clicks on the link provided in the comment below the picture, he will be asked to allow the application access to his profile:

If he allows access, 20 of his friends will become potential victims of the application.

F-Secure reports that there are similar rogue apps that do the same thing and they all have a variant of the Facebook name: Antivirus in Focebook (as the one above), F’acebook antivirus, etc.

Facebook will, without a doubt, remove the applications soon enough. In the meantime, warn friends not to fall for this scam.