The rumor of the death of Peter Steele, Type O Negative frontman, has spread like wildfire through the Net yesterday.

Confirmed by a number of sources, the unfortunate event became, in the meantime, one of the hottest searches on Google. Yes, you’ve guessed it: the great interest in the news was used to lure unsuspecting victims to webpages where they are in danger of being tricked into downloading and paying for fake AV software.

Here is how the first page of search results for the “Peter Steele Death” search terms looks like: 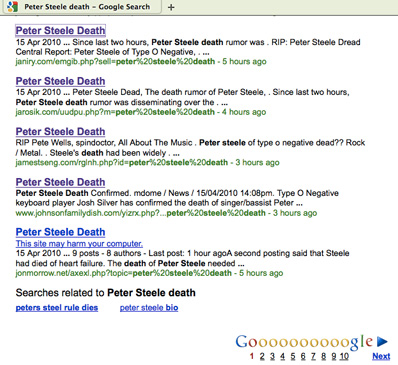 If you look closely, some links are marked by Google as malicious. Some of those that are not, present the following pages upon having been followed: 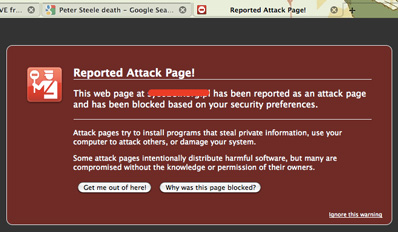 Google is obviously doing the best it can to warn you about these sites, but you can be sure that no matter how hard they try, there will always be some that slip through the cracks.

According to Securelist, the fake AV in question belongs to the CleanUp AntiVirus family.

Remember – visit only reputed news sites when searching for news on hot topics: celebrity news/death/rumors of death/ and natural and other disasters.