Not one to be out shined for long by Google – one of its biggest competitors in many fields – Microsoft has been working on some changes that will improve security for the users of their Hotmail webmail service.

According to The New York Times, other changes have also been announced, namely a new look and features that are aimed at improving its competitiveness. But, improved and new security features must take precedence in this online world of ours which is infested by spam, malware and cybercriminals.

The security changes are as follows:

1. Encrypted communication (HTTPS) will now be the default. So far, only the transmission of login information was encrypted.

2. A smallish green-shield-with-tick symbol will appear beside specific emails whose provenience has been verified by Microsoft. Emails from financial companies, banks, shopping sites and government agencies have often been faked by cyber crooks. Now Microsoft is going to verify them before it deposits them into your inbox, and mark them so you can be sure they are legitimate: 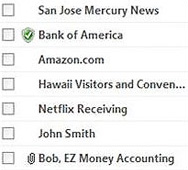 3. When you want to access your email account from a public computer, you will be able to request single-use passcodes from Microsoft and it will be sent to your mobile phone. Also, if your account has been hijacked, they will be able to send you a new password so you can access it again and recover it by changing the password.

4. “Personalized spam filtering” is a new feature that will allow messages from organizations and companies you communicate with often (but are not necessarily in you contact list) to pass through and not get sent directly into the junk folder. The spam rules will be configurable.

5. The “Sweep” feature will allow you to clean a multitude of messages from one sender from your inbox to the trash or a folder with one fell swoop. If you decide to dump them, you can also choose to have all future emails from that person go directly to the trash folder.