This enticing title accompanies a message which reveals to the user what is new in this Office version. Rated by members with 5 stars (out of 5, of course), this Beta version appears too hot not to be tested. To save the users’ time and get them down to this ardent matter as soon as possible, the promised beta version is attached to the message as a zip file. Quite suspicious, isn’t it?

When extracting it, the attachment reveals me an .exe file baptized under a baffling string of letters and figures, much in the style of a product key. This name is actually the product key users must input in order to activate the beta product.

However, a detailed file check exposes the fake beta as malware. 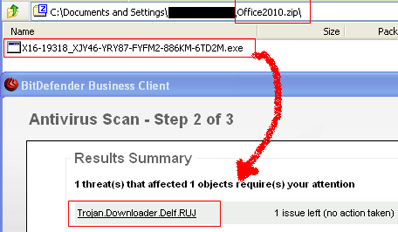 Identified by BitDefender as Trojan.Downloader.Delf.RUJ, this piece of malware affects the Windows platform. It is designed to infiltrate the user’s computer and open a conduit by which large amounts of adware and spyware can be piped into the affected system, therefore generating loads of popup adverts. Once installed, the Trojan creates a copy of itself into the and the registry is modified to run the respective copy at each Windows startup. Then, it attempts to connect to a specific IP address to download different malicious files. Trojan.Downloader.Delf.RUJis also a very dangerous threat to personal and financial data.

In order to stay safe, never open attachments without scanning them first. Install and update a complete anti-malware software solution and, if you want to test software, make sure you download it from the official vendor’s website.