Samsung is not the only company that has been lately caught shipping malware-infected consumer electronics – Olympus Japan has admitted that a little over 1700 units of the Stylus Tough 6010 digital compact camera that was available for sale in Japan contain a virus on the memory card shipped with it.

According to Sophos, the camera itself is not at risk – it is your PC that you have to worry about, since the card also contains an autorun worm that would allow the virus to take residence on the computer when you plug the device into it.

For the people who might have bought one of the “infected” cameras, Olympus has provided a widget on their official site where customers can insert the serial number of the camera in order to check if their device is affected: 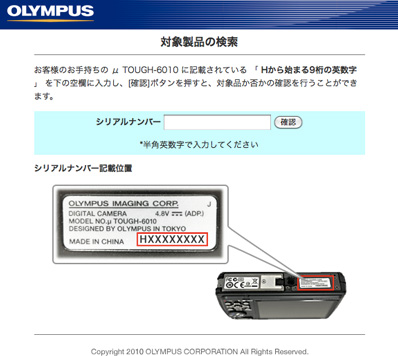 Unfortunately, for those who don’t know Japanese the site is pretty much useless – unless they have someone who can translate the results for them.