So, it turns out that your computer doesn’t even have to be infected for you to become a target for people who offer to disinfect it – and charge you, of course!

Symantec has been receiving information from different sources about a technical-support-by-phone service whose modus operandi is the following:

The name of the service is “Online PC Doctors”, and they even have a decent-looking website that doesn’t raise any suspicion at first glance: 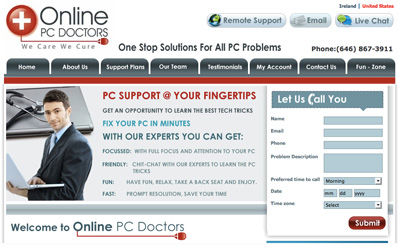 The fact that they are afraid of infections and malware but don’t know the first thing about how to check for it and remove it, makes inexperienced (and naive) users the ideal targets for such a scam. Any user that has a modicum of knowledge about how a computer system and the Internet works would be instantly suspicious about the fact that someone is calling him and saying that they KNOW that his computer is infected.

If you are certain that such a scam would never have worked on you, stop a moment and think: Is there someone you know that could have fallen for it? If you know of such a person, do them a favor and inform them of it.