Six days ago, an Englishman named Raoul Moat shot his ex-girlfriend, her new boyfriend and a police officer. The UK police has instigated a manhunt that has, so far, failed to lead to the arrest of the attacker.

News outlets are reporting closely on the chase, and the £10,000 reward that the police offered for any information which leads to Moat being captured has propelled people to go online and search for a picture of the man.

Cyber criminals promptly seized the opportunity and managed to poison Google’s Image Search results that come up when Moat’s name is entered. According to Sunbelt researchers, all of the top line search results redirect the user to serveradobe(dot)co(dot)cc, where they are prompted to install a Flash component to view the site: 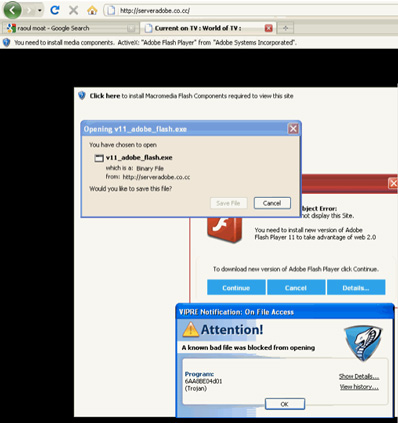 The file in question (V11_adobe_flash.exe) is thought to be malicious – most likely a rogue anti-virus solution.