Each year, cybercriminals generate billions of dollars by their criminal activities online. Therefore, the longer period of time a given malware remains undetected is directly correlated to a cybercriminal’s financial gain. This is why cybercriminals are investing a great deal of time and resources in protecting their systems and servers from detection. 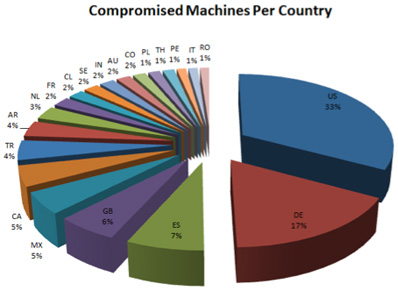 One commonality that exists among botnets is the way in which cybercriminals are hiding their servers from being shut down by security researchers and law enforcement officials.

One example of this is the “Mumba” botnet. Created by one of the most sophisticated group of cybercriminals on the internet known as the Avalanche Group, the Mumba botnet is a mass-production system for deploying phishing sites and crimeware.

A study conducted by AVG discovered one of the Avalanche Group’s servers and revealed that more than 55,000 unknowing internet user’s machines were compromised with data stealing malware inserted on their machines by the Mumba botnet. More than 60 gigabytes of data was identified on the server including credentials of social networking Web sites, banking accounts, credit card numbers, email communications and others.

Of those machines infected, 33 percent were found in the U.S., while other top infected countries included Germany, Spain, The United Kingdom, Mexico and Canada.

Cybercriminals are getting smarter and smarter at utilizing sophisticated techniques to evade detection by traditional URL filtering and database-driven security products. Protecting yourself from these attacks requires innovative Web security products that can scan the Web content you view in real-time for threats.