The first SMS Trojan made specifically for smartphones running Google’s Android OS has been detected by Kaspersky, and it seems that quite a few devices have been infected already.

The Trojan masquerades as a seemingly innocuous media player application and it misuses the Windows Media player icon. When installing the application, it even says which things you will allow it to do: 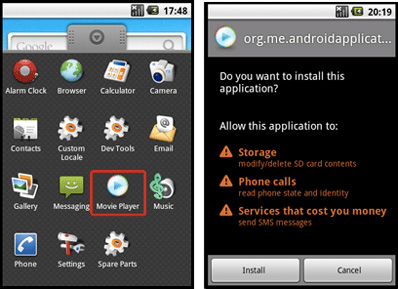 Further investigation by Trend Micro reveals that the application sends SMS messages to premium rate numbers, and since the user has consented to it upon installation, the application continues to do that without asking further permission.

Similar (1, 2) Trojans have already been detected in the past, but this is the first one that seems to be written specifically for Android-running devices, which is a sign that cyber crooks have noticed the increasing popularity of the platform.

Users are urged to pay attention to what data and functions the application asks access to during the installation process.