Earlier this morning, Sophos begin to warn people about a new Twitter XSS flaw that is being used by malicious individuals to redirect users to third-party websites without their consent, by simply rolling their mouse pointer over the offered link.

The vulnerability – dubbed “onmouseover” because of the onMouseOver JavaScript code used to exploit it – was firstly used by a variety of Twitterers to have some fun and post “rainbow tweets” and make innocent text boxes pop up. 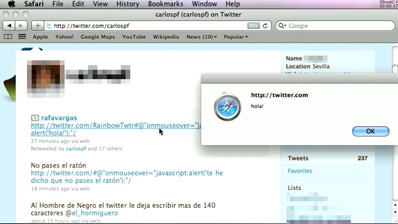 But, as Kaspersky‘s Georg Wicherski noticed off the bat, “this vulnerability looks at least semi-wormable, so better turn JavaScript off on Twitter for now!” Further updates on his part warned that that might not be enough, since “it is possible to load secondary JavaScript from an external URL with no user interaction”, and then that a worm exploiting this vulnerability has been spotted.

Not even half an hour later, he seemed to think that Twitter has reacted and patched the bug. But, while this entire thing was going down, it looks like certain individuals have exploited the bug to force anyone who intentionally or accidentally rolls over the link to repost the offending Tweet.

The worm spread virally, especially because it is difficult not to roll the mouse over the link by accident. Additionally, it seems that a new variation of this attack has surfaced, and that it uses class=”modal-overlay” to make it difficult for users to remove the tweet in question from their accounts. As Softpedia reports, with its use the entire page becomes “one big clickable link”.

So far, only the main Twitter site seems to have been affected by the flaw, so security professionals are advising users to use third-party Twitter client for accessing their accounts. Or, better yet, to wait for an official note from Twitter saying that the bug has indeed been patched.

UPDATE: Twitter notifies that the vulnerability has been closed.