While organizations see the potential value of Web 2.0 tools, decision makers continue to debate whether or how to allow employee usage of the technology in the workplace. 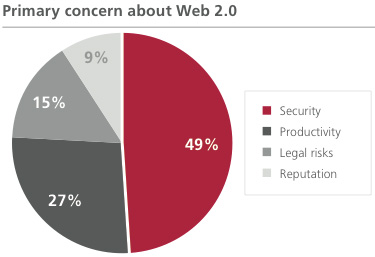 A McAfee survey of over 1,000 global business decision-makers in 17 countries found that half of businesses were concerned about the security of Web 2.0 applications such as social media, micro blogging, collaborative platforms, web mail, and content sharing tools.

More than six out of ten organizations have already suffered losses averaging $2 million, for a collective loss of more than $1.1 billion in security related incidents last year. There was another 60 percent concerned about loss of reputation as a result of Web 2.0 misuse.

Brazil, Spain and India led in adoption of Web 2.0 technology for business, while adoption was lowest in Canada, Australia, the United States and the United Kingdom.

New revenue streams are the highest driver of Web 2.0 adoption – Three out of four organizations reported that expanded use of Web 2.0 technologies create new revenue streams while 40 percent said the tools have boosted productivity and enhanced effective marketing strategies.

Security is the leading concern – Half of respondents named security as their primary concern for Web 2.0. There was also a third that identified fear of security issues as the main reason Web 2.0 applications are not used more widely in their business. Companies’ top four perceived threats from employee use of Web 2.0 are malicious software (35 percent), viruses (15 percent), overexposure of information (11 percent) and spyware (10 percent).

Reputation damage is the biggest business consequence – Sixty percent of companies reported that the most significant consequence from inappropriate Web 2.0 and social media usage is loss of reputation, brand, client or confidence. One third of respondents reported unplanned investments related to “work arounds” related to social media in the workplace. Fourteen percent of organizations reported litigation or legal threats caused by employees disclosing confidential or sensitive information, with more than 60 percent of those threats caused by social media disclosures.