iLIVEx is a fast, secure and fault-tolerant X11 client that turns the Apple iPad into an X terminal for Linux and Unix. It allows iPad users to connect to Unix and Linux desktops and applications hosted on remote Unix and Linux servers.

iLIVEx features an ultra-thin data transfer protocol allowing for LAN-like performance, even over 3G connections. Its connections also run over securely encrypted SSH tunnels. Built-in session persistency allows users to reconnect to their remote desktops should the iPad get disconnected, turned off or the user temporarily switches to another iPad app. 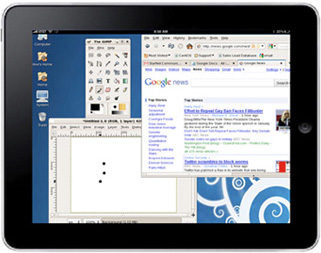 iLIVEx is also designed to provide non-Linux users the ability to run a remote desktop. With their purchase of iLIVEx, StarNet provides a free Linux desktop account on a StarNet-hosted Linux server. On their remote desktop users gain a number of capabilities not currently available on iPads. These include:

Viewing Flash – By way of Firefox on their remote Linux desktop, iLIVEx enables iPad users to work with flash-based web sites and applications.

Persistency – Users can reconnect to their remote Linux/Unix desktop at any time, even after the iPad has disconnected from the network. No work is lost due to a disconnect.