Ubuntu 10.10 introduces an array of online and offline applications to Ubuntu Desktop Edition with a particular focus on the personal cloud. Ubuntu Netbook Edition users will experience an all-new desktop interface called “Unity’ – specifically tuned for smaller screens and computing on the move.

Already one of the most popular operating systems on Amazon EC2, Ubuntu 10.10 Server Edition gets kernel upgrades, more configuration options at boot time, and the ability to run the AMI (Amazon Machine Image) off-line on a KVM-virtualised machine. The latter feature means users can test and develop on local servers before pushing to the public cloud – true hybrid cloud computing. 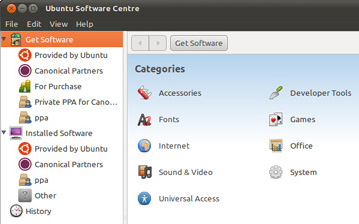 Ubuntu 10.10 extends “CloudInit’, a configuration tool that allows users of Ubuntu on the cloud to set a default locale, set the hostname, generate and set up SSH private keys, and set up mount points. Users can also run custom commands and scripts on initial startup or on each reboot. The technology was recently adopted by Amazon itself.

Additionally in Ubuntu 10.10, Ubuntu Enterprise Cloud adds virtio support, a new interface for administrators, eased deployment for developers and the ability to run UEC from a USB stick. Eucalyptus 2.0, the latest version of the core cloud technology in UEC, has been included.

GlusterFS and Ceph have been integrated into the core product and the groundwork has been laid for many cloud-focused enterprise-scale applications to be introduced over the life cycle of Ubuntu 10.10 and the current LTS version (10.04) of Ubuntu Server.