Other updates include a new dashboard that increases product manageability and control of the email scanning system and smaller AV updates. 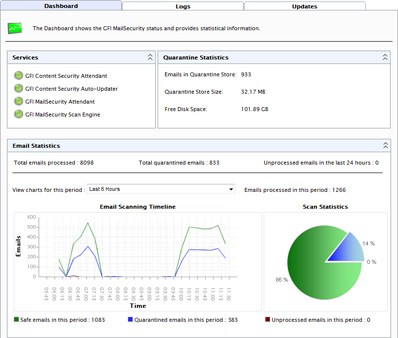 GFI MailSecurity uses multiple antivirus engines to scan inbound email to drastically reduce the average time required to obtain the latest virus signatures, enabling a faster response to combat the latest threats. The level of security afforded by GFI MailSecurity is further boosted through other integrated technologies such as an exploit detection engine, spyware detection, HTML sanitization and attachment checking.

The latest version addresses two key attack vectors: the most recent malware for which definitions have not been released and links in emails that point to malware. To prevent new malware types from becoming a major problem for administrators, GFI MailSecurity 2011 uses Norman AV’s Sandbox technology. This takes suspect malware and runs it in a “sandbox’ where the software analyzes the code’s activity in a safe environment.

Also in the GFI product portfolio is GFI LANguard, a network security and vulnerability scanning tool on the market and is offered as a freeware version, allowing full functionality for up to 5 IPs. GFI LANguard also features powerful patch management capabilities ensuring all the latest Microsoft patches and updates are deployed throughout your network.