As in recent months, Trojans dominated the threat landscape in November, according to GFI Software. Their data revealed that seven of the top 10 malware threats were classified as Trojans. The number-one detection, Trojan.Win32.Generic!BT, is a Trojan comprising over 20 percent of the ThreatNet detections.

Tom Kelchner, GFI Software communications and research analyst said, “There is another picture in the top-10 numbers. Three of them go after applications or server software that hasn’t been patched. The number six detection, Exploit.PDF-JS.Gen (v), tries to exploit a security flaw in PDF files with embedded JavaScript. That’s aiming at Adobe products. It often installs downloaders that pull down other malware from remote Web sites.” 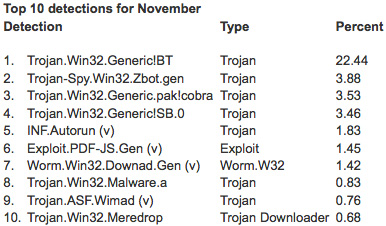 Worm.Win32.Downad.Gen (v,) the Downadup worm (also called Conficker and Kido) in the number seven spot, is a worm that spreads across a network by taking advantage of a vulnerability in Windows Server service which allows remote code execution when file sharing is enabled. This vulnerability was patched some time ago.

Trojan.ASF.Wimad (v), in the number nine spot, is a VIPRE detection for a group of Trojanized Windows media files that exploit an old vulnerability in Windows Media Player. It redirects the victim’s browser to a web site to download malicious files. This is also is an old vulnerability that’s been fixed.

“If this malcode is still circulating, it means that the malcode writers are seeing a landscape with lots of unpatched and vulnerable machines. The conclusion is pretty clear for both enterprises and consumers: update Windows operating systems (including servers), browsers, Adobe products and media players and keep them updated,” said Kelchner.