More than 60 percent of respondents have tried multiple anti-virus products over the course of a year, according to Avira. In addition, 25 percent of the users admitted to turning off their anti-virus protection because they thought those programs were slowing down their computers. 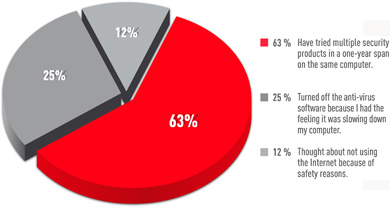 The sample size of the consumer security survey was 9,091 and the questions were posed to Avira’s 100+ million customers worldwide, giving the survey an international flavor. Here are the top findings from Avira’s November security survey:

“It’s not surprising that consumers try multiple security products each year since everyone is trying to find the right security product which can effectively balance protection and a computer’s resource usage,” said Sorin Mustaca, data security expert, Avira.

The scary take-away from this survey is that 25 percent of the respondents admitted to turning off their security products because they feel that it hurt the performance of the machine. That’s not a good idea because such a practice leaves the computer totally exposed to the even simplest of viruses, allowing the bad guys to include it in a botnet used to distribute malware and phishing.

“It is a clear sign for the vendors that even more care has to be taken in order not to overload the security software with features which may have a great impact on system performance. In the end, when it comes to security, it is better to have minimal protection which goes unnoticed than protection with all whistles and bells which the user deactivates in order to be able to use his computer,” added Mustaca.