In October Commtouch reported an 18% drop in global spam levels (comparing September and October). This was largely attributed to the closure of Spamit around the end of September. Spamit is the organization allegedly behind a fair percentage of the worlds pharmacy spam.

Analysis of the spam trends to date reveals a further drop in the amounts of spam sent during Q4 2010. December’s daily average was around 30% less than September’s. The average spam level for the quarter was 83% down from 88% in Q3 2010. The beginning of December saw a low of nearly 74%. 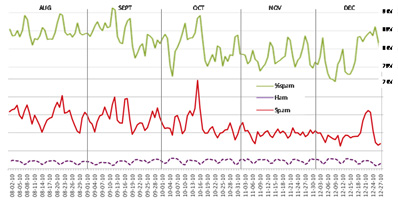 The nature of the spam attacks has also clearly changed. The pre-October graph shows large fluctuations in the amounts of spam sent. In Q4 2010 there were generally lower fluctuations – aside from two large outbreaks in mid-October and mid-December.

The large amounts of pre-Christmas spam are something of a tradition, but here too the outbreak was smaller than most of the large outbreaks this year.

Spam levels have decreased in the past only to return to even higher levels within short periods. Don’t pack away your anti-spam just yet.

Commtouch have also included a more detailed view of the Ham graph. As always, weekends are clearly visible as is the Christmas decline. Ever wondered about worker productivity? Tuesday seems to be the day we get the most work done (or at least send the most emails).