In the wake of massive data breaches of payment card information in the past few years, the topic of PCI compliance and its adoption has been top of mind in any organization concerned about suffering a similar fate.

Cisco unveiled the results of a survey of 500 information technology decision-makers to uncover and qualify current sentiment on PCI DSS five years after the standard emerged. The survey included IT decision-makers involved in their organizations’ PCI-compliance programs from the education, financial services, government, health care and retail industries. 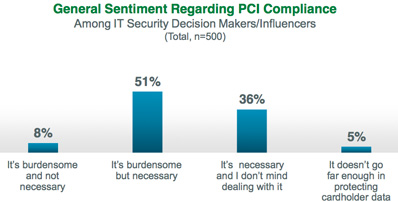 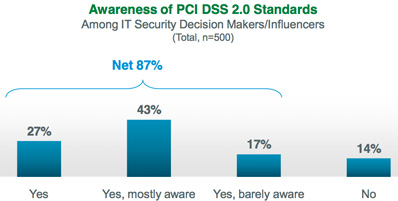 When asked to define specific challenges for implementing the PCI DSS requirements, educating employees on the proper handling of cardholder data was the single most highly recognized problem that organizations identified, with 43 percent of respondents suggesting this is an issue. Updating antiquated systems was named by 32 percent of respondents.

Adherence to the PCI DSS

Government fares better than other sectors on PCI assessments, but the vast majority of respondents are making strides in protecting their sensitive cardholder data.

The Cisco study is available here.