The latest step that Facebook took in the long process of eroding our privacy expectations happened on Friday.

The social network announced on their Developer Blog that from now on, developers of Facebook applications will be able to collect the current address and mobile phone number from the users that give their permission: 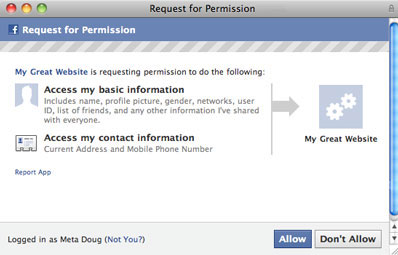 “Please note that these permissions only provide access to a user’s address and mobile phone number, not their friend’s addresses or mobile phone numbers,” they added in the blog post, but I don’t think this should count as a mercy, since it is only a matter of time until that next step is made.

Facebook is a very useful tool, and its users have proved to be very adept at ignoring all the privacy concerns regarding its use that arise every so often, so it’s no wonder then that Facebook is quietly chugging along this path undisturbed.

The thing that Facebook users should keep in mind is that they are not the social network’s customers – those who are placing ads are. And it is in their interest to know everything there is to know about the users.

Facebook defends its decision by saying that the customer needs to give explicit permission to the application to harvest this data, but the various Facebook scams that crop up daily demonstrate that it doesn’t work. And you can’t help but think that they insist on this obviously flawed concept only because it suits them.

The full extent of the consequences of this step will, no doubt, become known soon. Just think about all the rogue apps that will pop up only to collect that data and use it to send spam to your mobile phone or sell that information to other parties that might take advantage of it. And knowing your home address can come very handy to identity thieves.

As things stand now, it would be best to delete this information from your profile. And while you’re at it, all the information you don’t want anybody else to know. Facebook has proved once again that it doesn’t really care about your privacy, so you must protect yourself.