Organizations lack a sense of urgency for securing critical data, according to a new report by Application Security. The report found that the greatest challenges to securing application and data environments are primarily organizational and budget related. 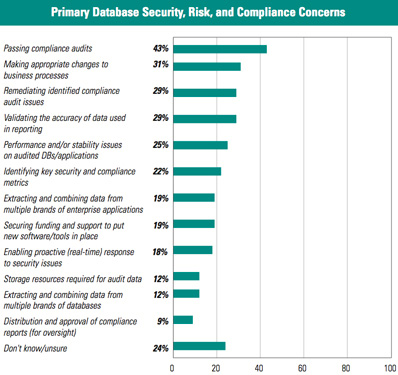 Fifty-three percent of respondents stated that budget was the greatest impediment holding back information security efforts. Thirty-three percent claimed a lack of an understanding of the threats prevents them from rallying support for countermeasures. And more than one-fourth of respondents cited a disconnect between IT teams and executive management as a major impediment to implementing proper security measures.

During a period when the proliferation of cloud computing is increasing, the report found that forty-five percent of the respondents see some risk in the rise of “private cloud” computing and were concerned about the security implications of sharing data and application services outside of their business units. While cloud computing continues to be a growing industry trend, three out of four have not defined a strategy for cloud security.

“Private cloud computing, by its very nature, crosses enterprise departmental boundaries,” said Joe McKendrick, Lead Analyst for Unisphere Research. “While it is perceived as safer than public cloud computing, private cloud also introduces new information security risks. The survey confirms that sensitive data is handled across many parts of organizations – from development shops to backup sites – without safeguards such as data encryption, masking and de-identification. Private cloud may exacerbate this risk.”

Adding to the risk, a large segment of companies rely on third parties external to the organization’s firewall to help manage application and data environments. Nearly forty percent respondents indicate that they outsource or offshore at least some of their database and application administration functions

The study found that forty-three percent of the respondents were most-concerned with passing compliance audits, however, only fifty-six percent have successfully passed audits most or all of the time, while thirty-six percent are unsure on their standing.